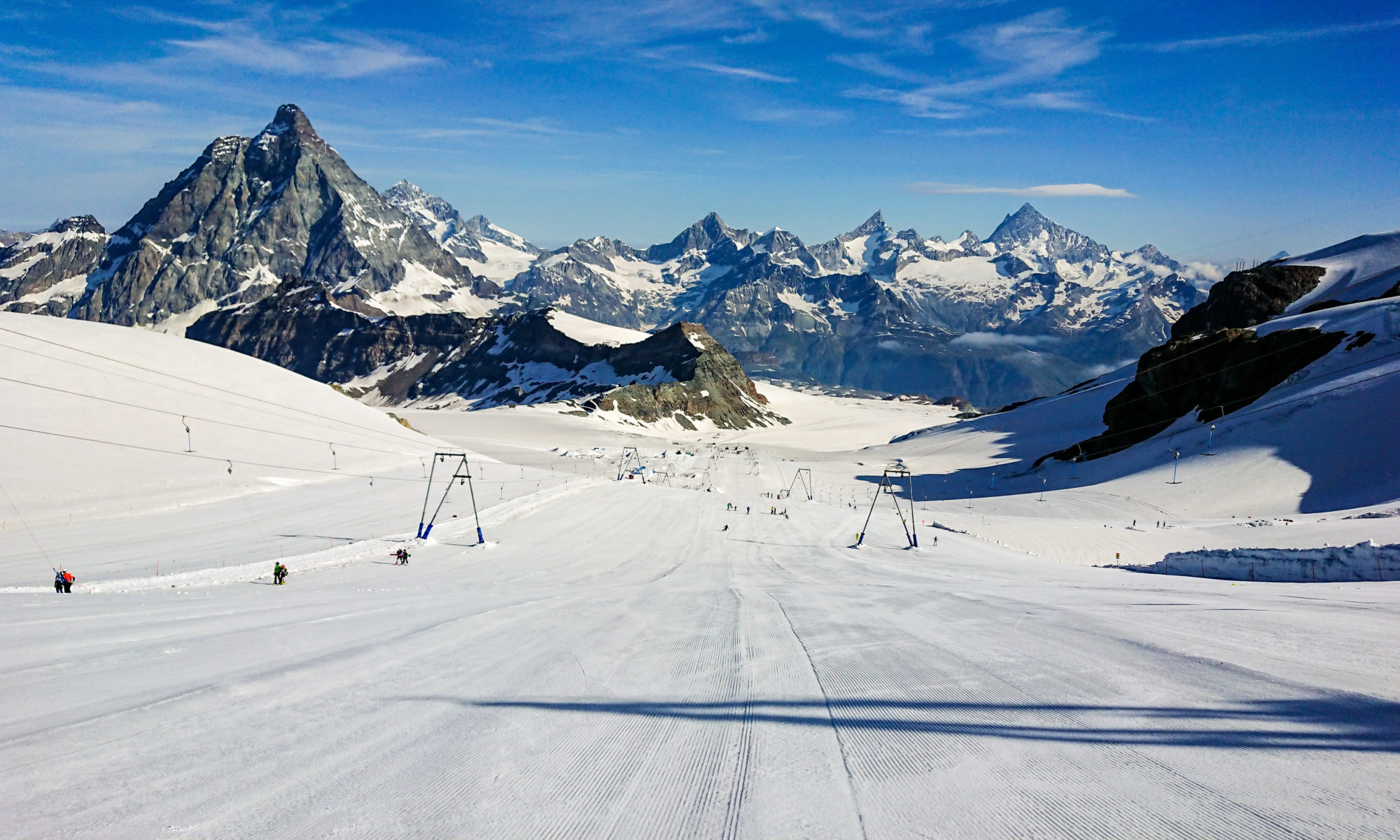 July was – besides September – the only month missing in my skiing calendar (I have already skied in all other months of the year). Therefore I decided to go to Zermatt in the early days of July 2018.

Driving through Switzerland is an experience itself, as the views are simply stunning.  Heading from north and trying to avoid car train tolls I took a route through Grimselpass, where the windy road takes you as high as over 2100m above sea level. 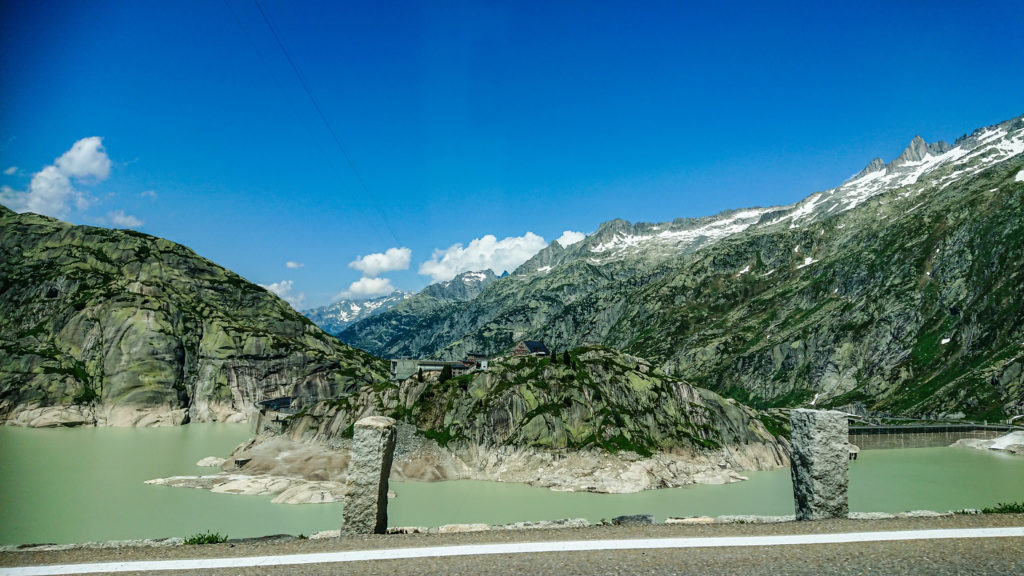 Zermatt itself is a car-free zone, so I left my car at the Täsch terminal and took a train shuttle. Electric taxis are usual way to move around Zermatt and most hotels provide free shuttle from and to the train station. The town is beautifully located, between steep walls of the valley and with majestic Matterhorn lurking from high above. 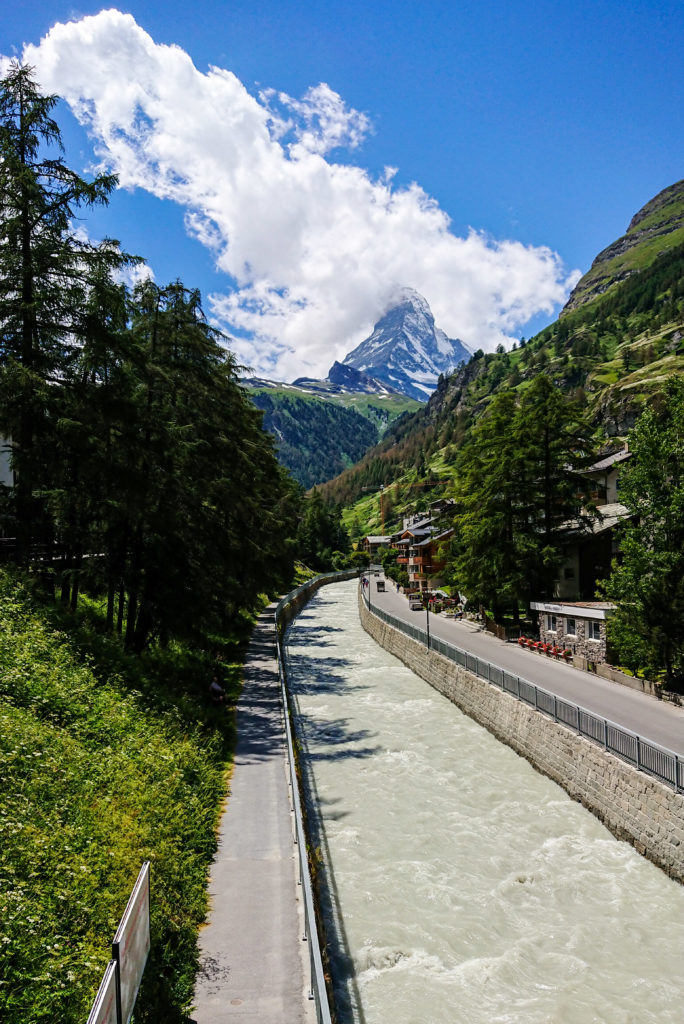 In summer the ski resort is open from 7.15 till 13.00. The lift takes you from the town up to 2900m, and then you change to a cable car that lifts you to 3880m. There you start exploring Matterhorn Glacier Paradise or start to ski 🙂
Throughout the season various lifts may be open, considering maintenance works etc. 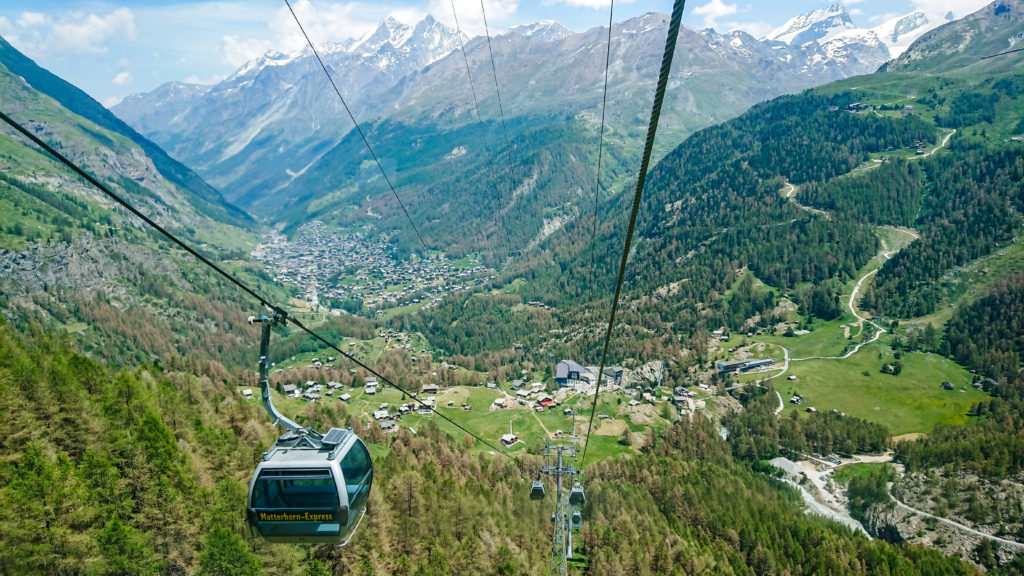 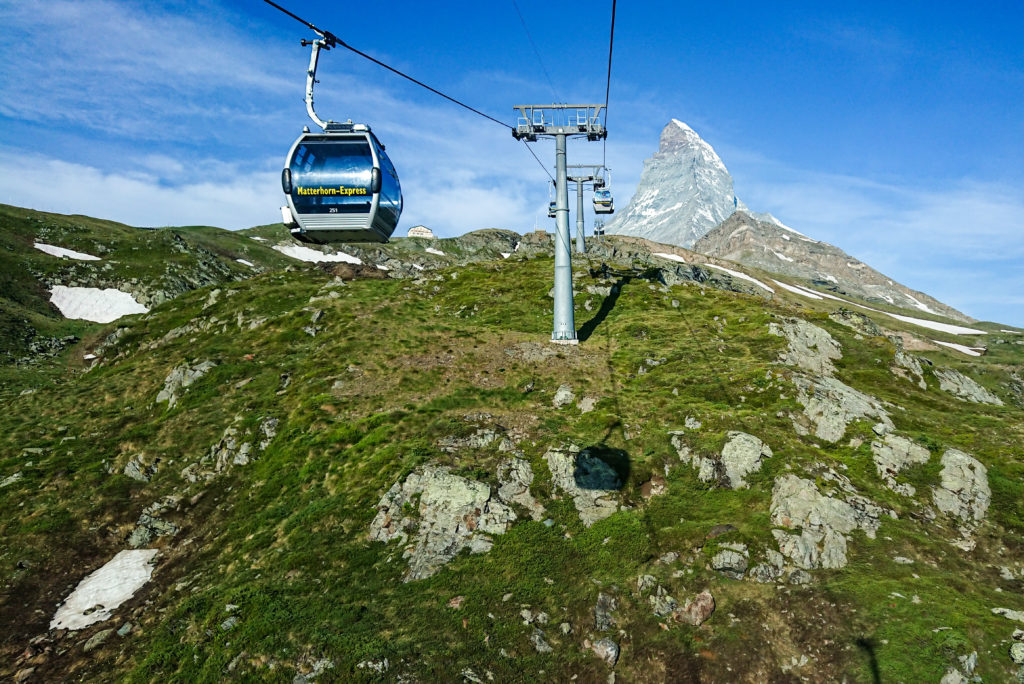 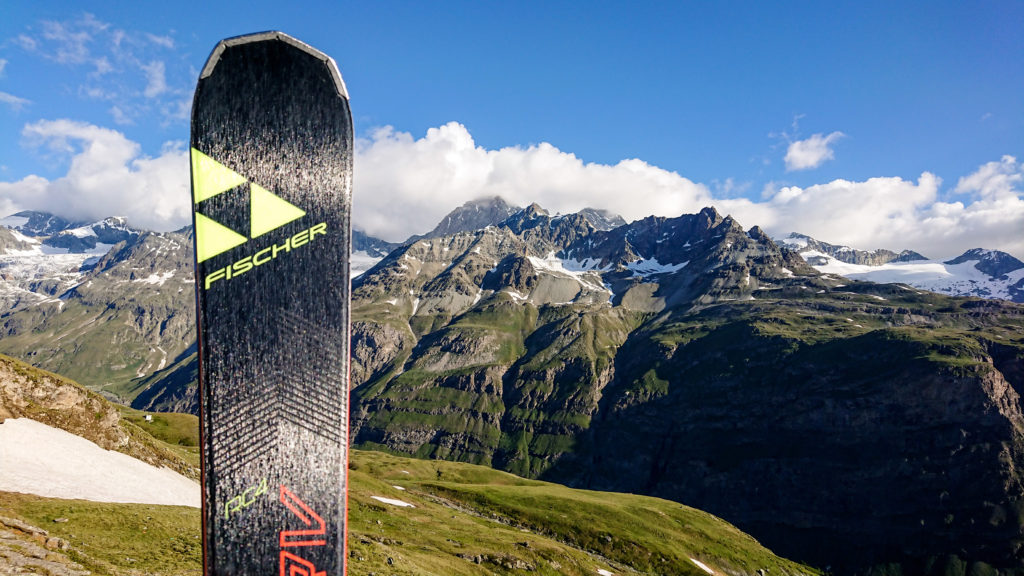 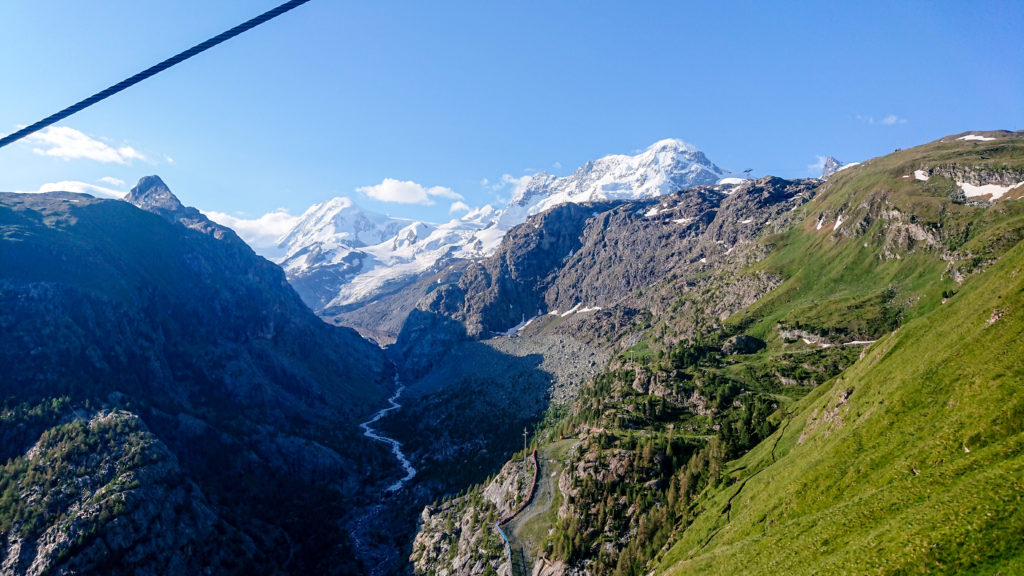 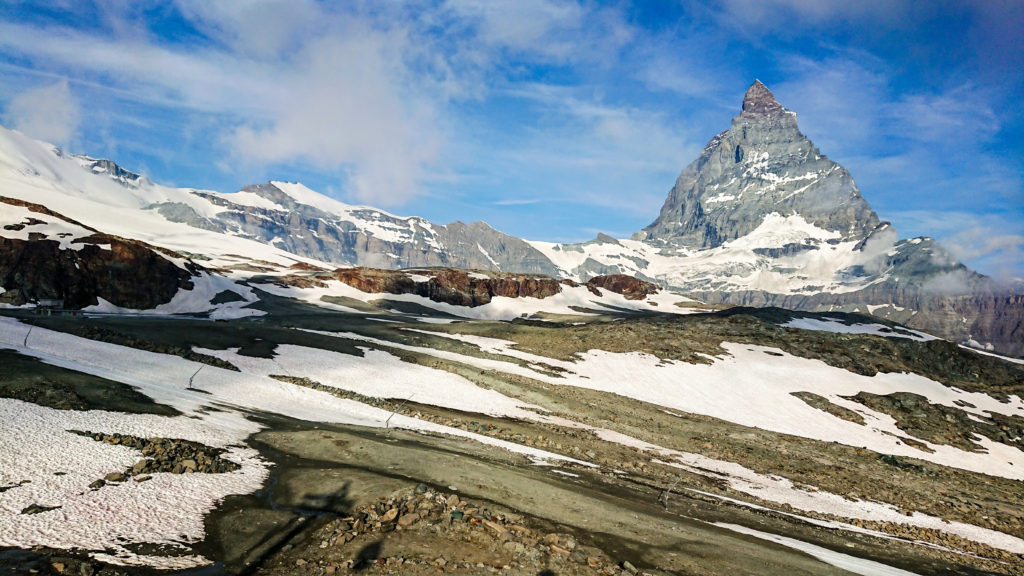 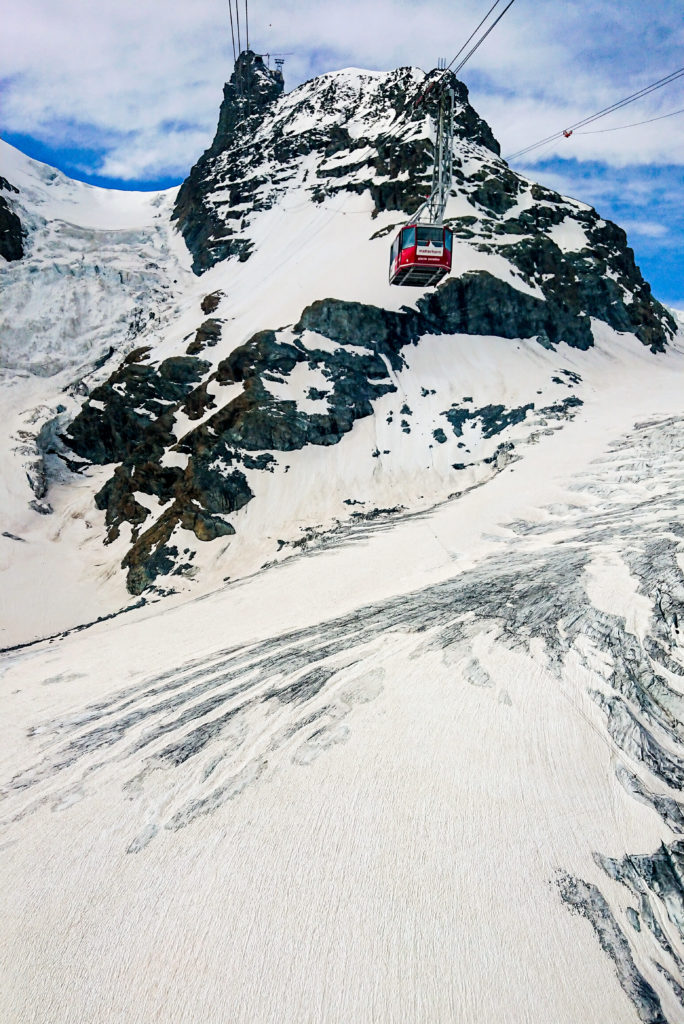 The ski area offer 23km of ski pistes, however most of them are located on Plateau Rosa, with several parallel runs and T-bar lifts. The run from Plateau Rosa to Trockener Steg (2939m) offers acceptable conditions only early in morning, as it becomes soft and slushy in the course of the day. There is also one slope available on the Italian side (Cervinia, slope #7)

The snow on Plateau Rosa was excellent – even in the afternoon it allowed very enjoyable skiing, with no slush, bumps or ice. Due to elevation, the summer thunderstorms in the valley brought a soft layer of powder in the ski resort area. 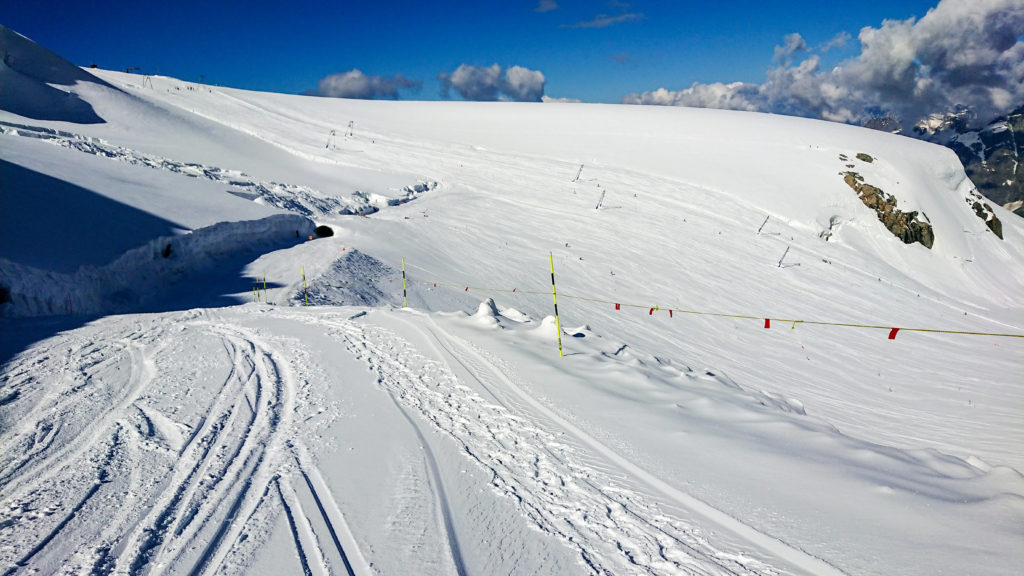 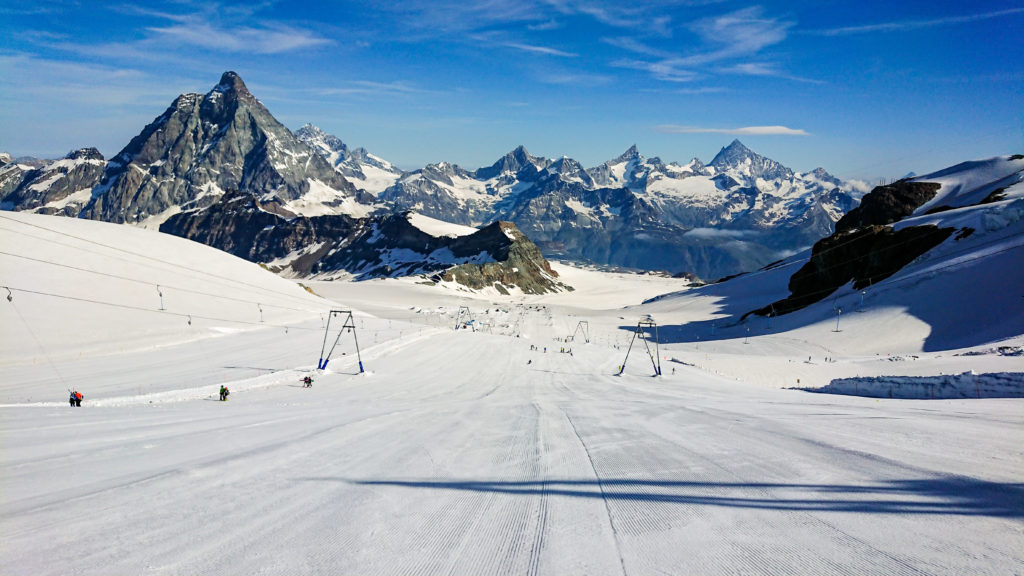 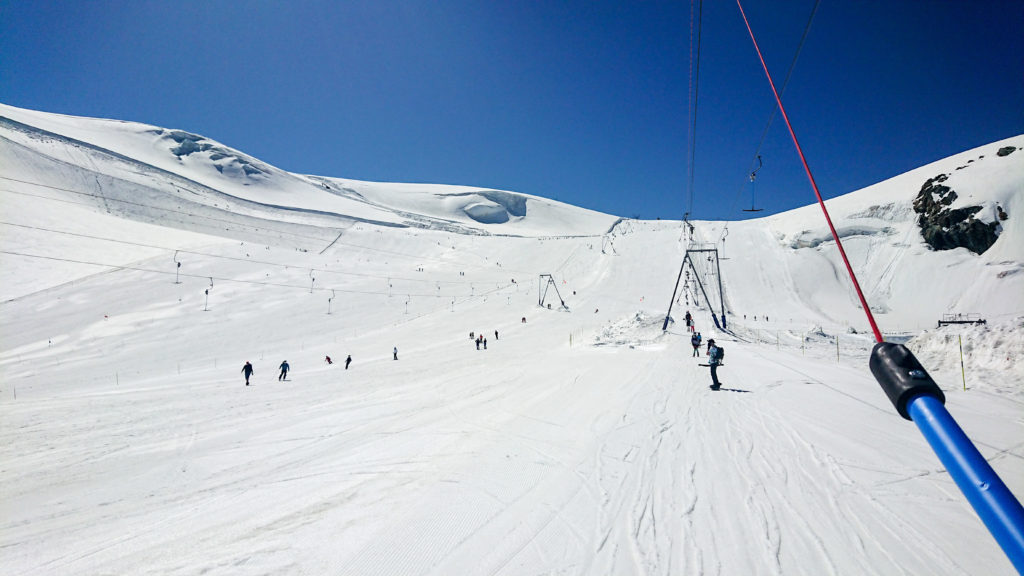 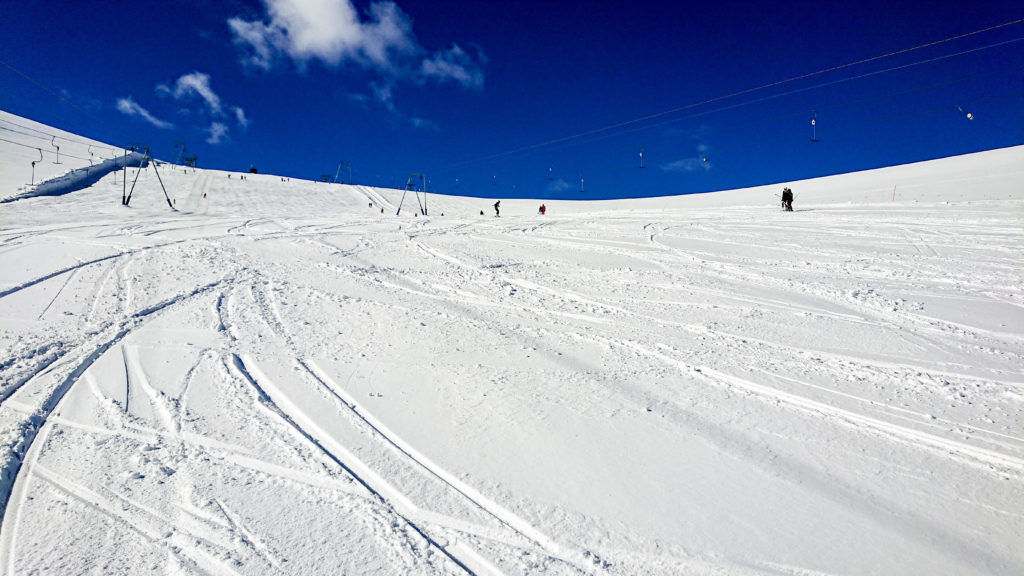 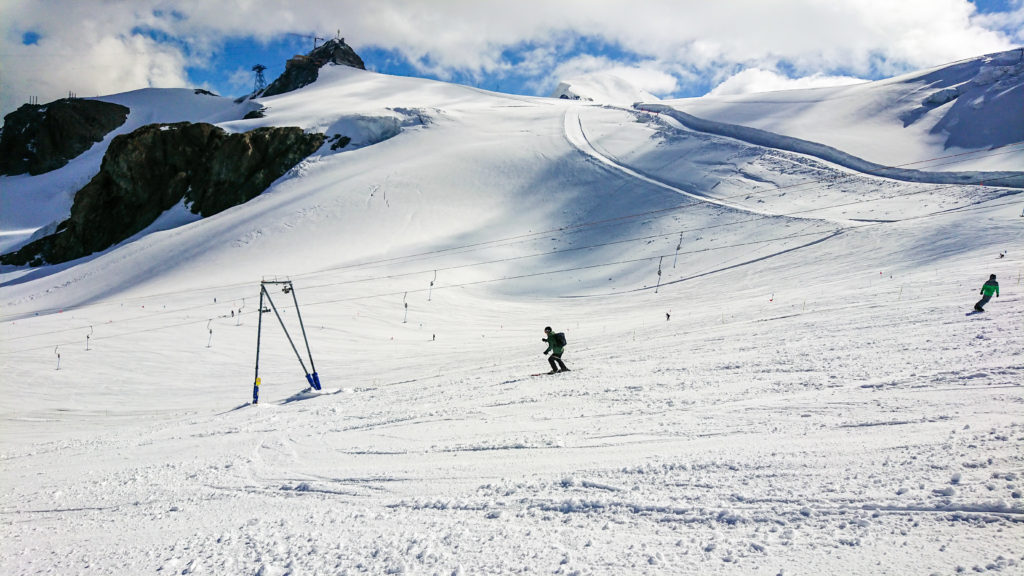 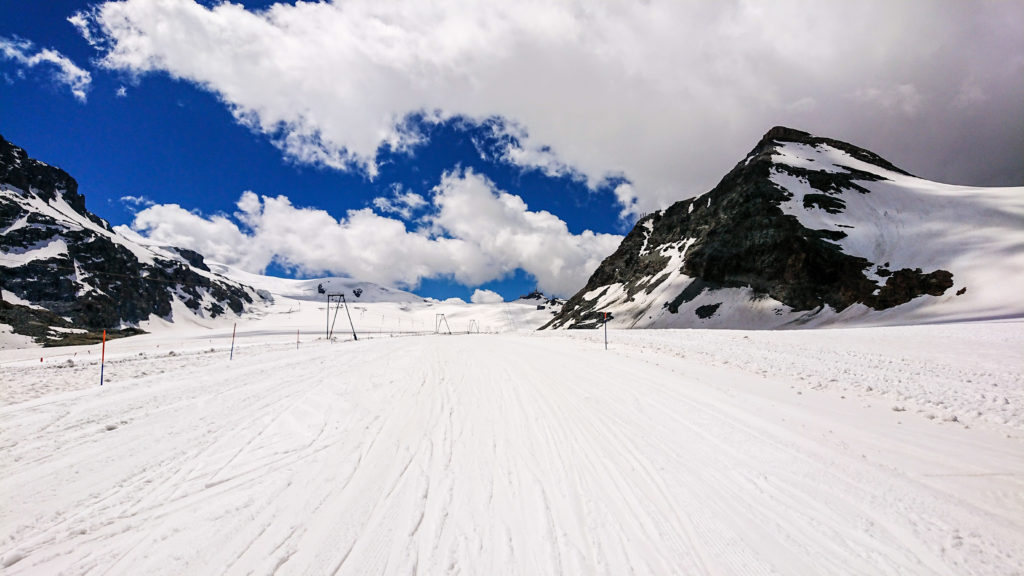 At the beginning I wasn’t aware of the Italian side of the resort, as the lady who was passing T-bars to skiers told that there was simply “nothing”. When I checked that for myself, I discovered a lovely, nearly 3km long, wide slope with hardly any people. The snow was not as good as on Plateau Rosa due to elevation, but it remained in a pretty good condition for surprisingly long.

One of the reason people were avoiding that slope, I guess, was the waiting time. It turned out, the lifts on the Italian side had not only “open” and “closed” status, but “stand by” as well. “Stand by” meant, that when I skied down to the station, there was literally nobody and all the lifts were off. I was even afraid that the entire resort was shut down and I would have problems with getting back to Switzreland. However I found some people from the station staff, who launched the huge cable car and took me – the only passenger – back to the top. One ride down and return trip took about 30 minutes, which – considering short operation of the area – was not really worth waiting. 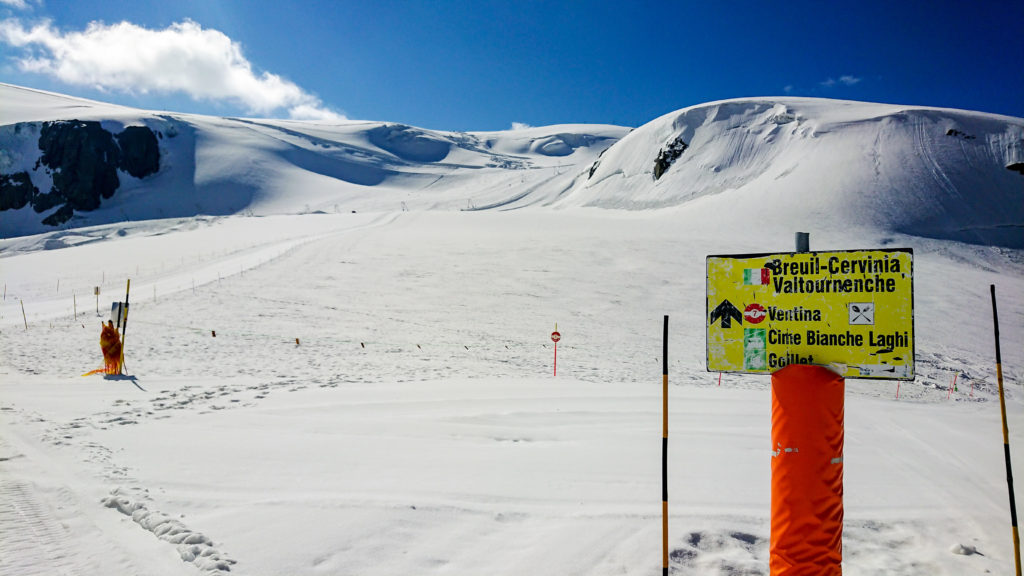 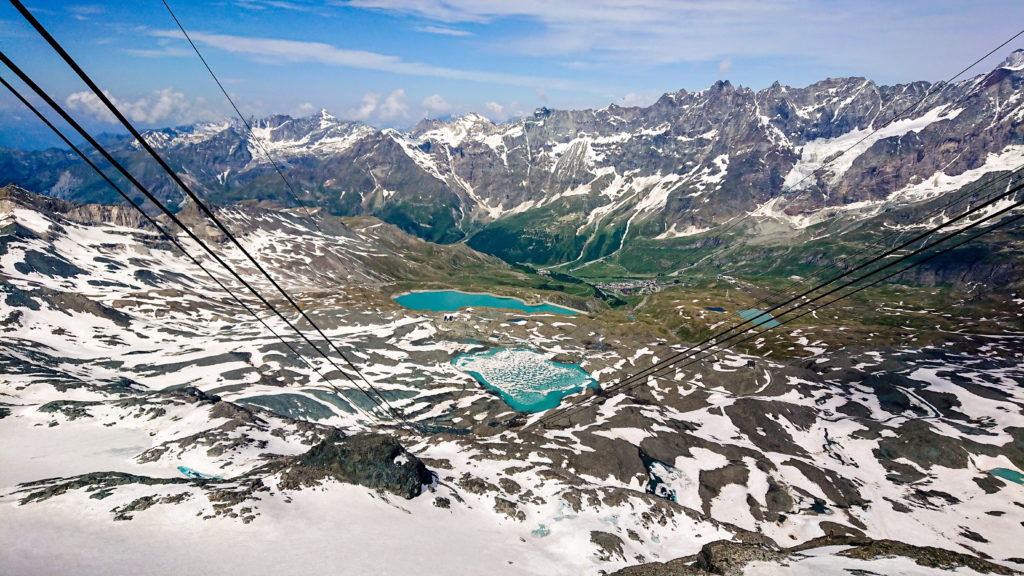 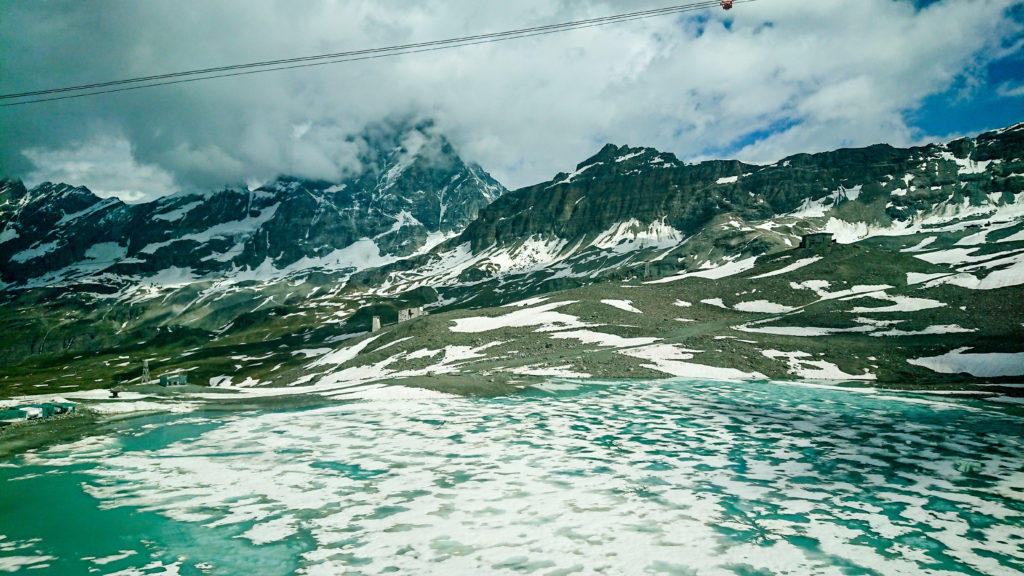 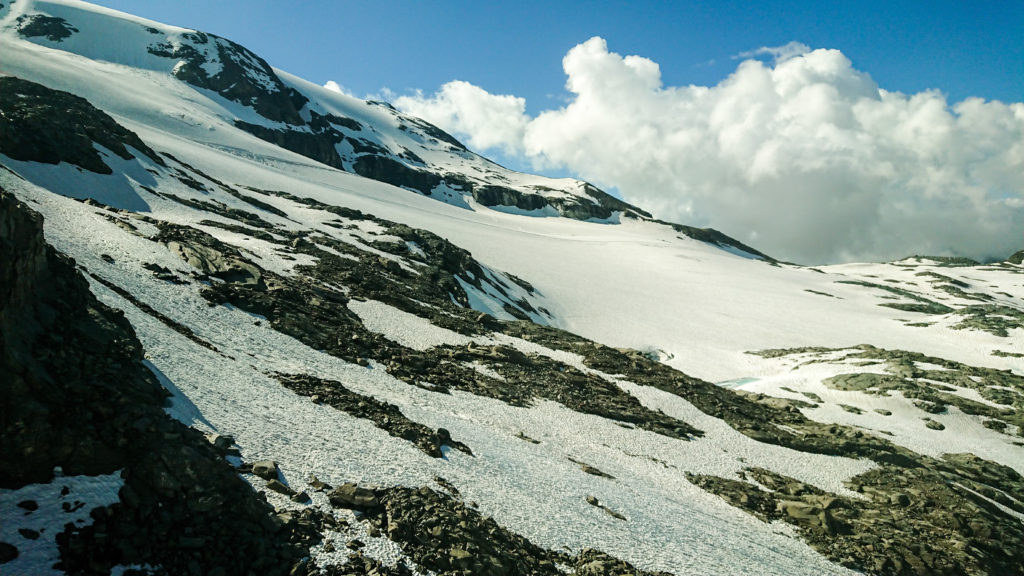 All in all, the trip was was amazing. Great skiing and beauty of the glacier will definitely make me go back there again sometime in the future. 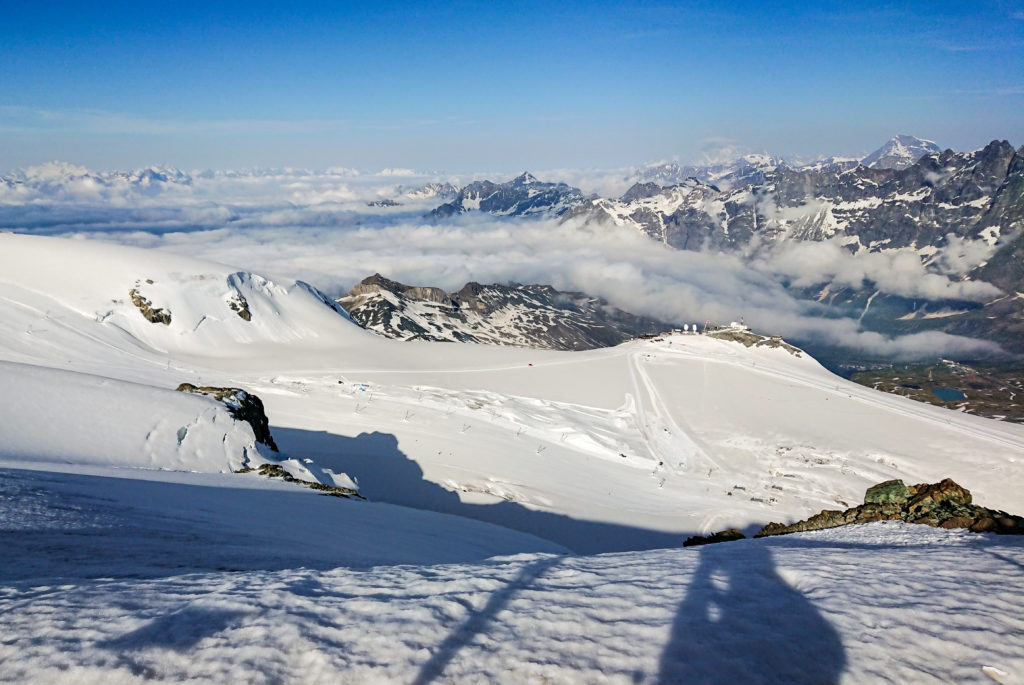 And here’s short overview of all slopes and lifts in Zermatt summer ski area.